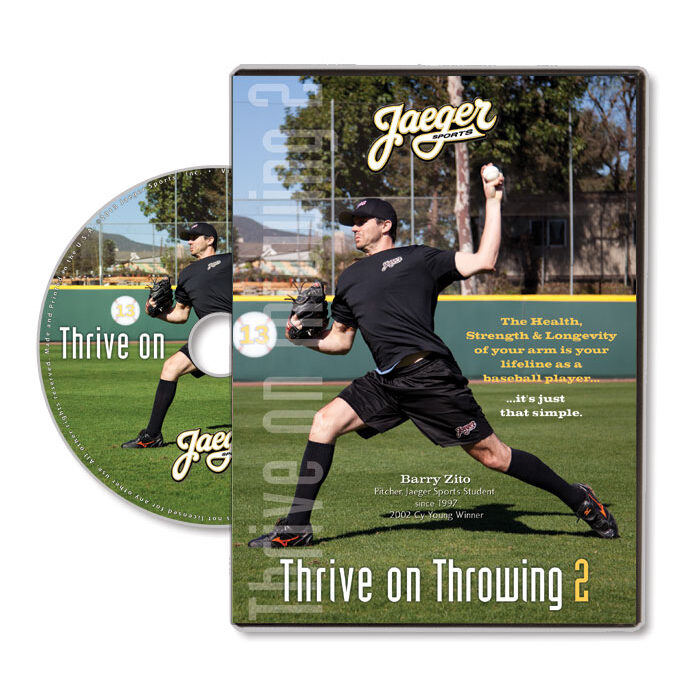 Jaeger Sports is very excited to announce the release of Thrive on Throwing 2, which takes you through our systematic Arm Care and Long Toss Throwing Program that has been at the core of our training program for over 20 years. Based on three major principles — Arm Care, Long Toss and Throwing Mechanics — Thrive On Throwing 2 is a proven system that has helped players maximize the Health, Strength, Endurance and Recovery Period of their arms.

Featuring a detailed explanation and demonstration of our Arm Care Program (Arm Circles and J-Bands) and our Long Toss Throwing Program, this DVD teaches you how to thoroughly warm up your arm and safely prepare it to throw, and culminates with our signature Long Toss Throwing Program — a throwing routine that is at the core of developing Arm Conditioning, Arm Strength, Athleticism, Feel, Mechanical Connection and Mental Focus.

The Health, Strength and Longevity of your arm is your lifeline as a baseball or softball player — it’s just that simple. But the arm must be developed like any other part of your game through dedicated work and preparation — by being proactive, instead of reactive. Thrive On Throwing 2 was created with this in mind, and is a must see video for anyone who is serious about having a long and healthy playing career.

No comments to show.